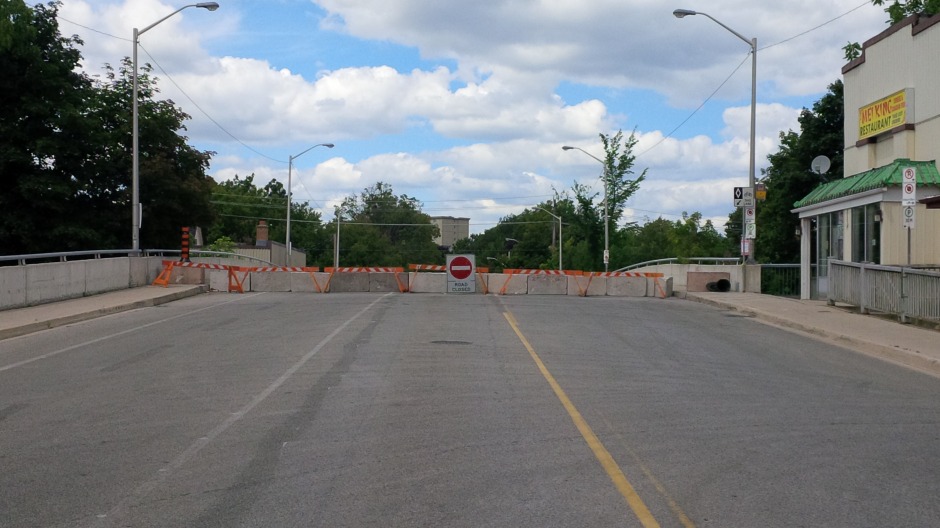 The Margaret Avenue bridge has been closed to vehicles, cyclists and pedestrians since the city received a report indicating that the bridge was at risk of collapsing.

Since that time, the city with the help of consultants have been figuring out how to proceed.

On Monday afternoon, the Council’s Community and Infrastructure Services Committee meets to consider this staff report on the future of the Margaret Avenue bridge. You may also be interested in some media reports on the future of the bridge from the local CBC radio station and the Waterloo Region Record.

The preferred option is to tear down the bridge as soon as possible and then begin planning for a replacement. So I doubt you’d see a replacement in 2014.

The staff report also considers temporary repairs that could reopen the bridge in 2014 but it’ll eventually need to be be torn down and replaced two years later. A benefit of this second option is that it’d reopen the bridge while Weber Street and King Street have major reconstructions over the next few years. Personally, I think that may be the better solution.

But no decisions have been made yet. The report goes to a council committee on Monday afternoon and later goes to a Council meeting. There is time to let Council and staff know what you think.

[Sept. 10 Note: There was a special council meeting to deal with this issue after the committee meeting on Sept. 9. The decision at both was to remove bridge as soon as possible and rebuild sooner than later.]

What do you think?

Do you prefer one option over the other? Is there another option the city should be considering?

❤️
Baaaa! I hope the rain will be gone by dinner. Xo
Did you have a good day? I enjoyed every sniff.
I’m hoping for rainbows this week. 🌈❤️
Central Frederick
Kitchener, Ontario
1-519-741-2501 central.frederick@gmail.com
%d bloggers like this: